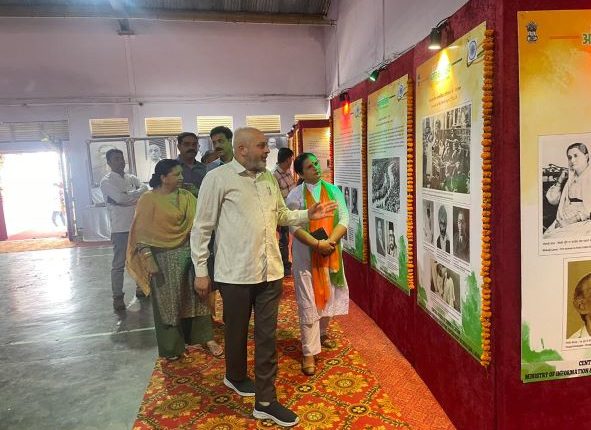 The Exhibition is being organised by Central Bureau of Communication, Kathua (J&K) Ministry of Information & Broadcasting Government of India.

Pertinently, the Multimedia Exhibition by CBC, J&K has been organised at Basohli as a part of celebrations of 75 Years of India’s Independence.

The aim of organising the 2- day exhibition is to transfer the stories, events, highlights and struggle of unsung heroes of independence struggle to the present generation especially youth and children.

A special facet is also put up to highlight the contribution of freedom fighters belonging to Jammu. Selfie corner, cut outs of national heroes and ‘New India Samachar’ magazine of Govt of India are the main attraction for the youth.

BDC Chairman, Basohli, Sushma Jamwal, in her address, said that ‘Azadi Ka Amrit Mahotsav’ is an initiative of Government of India to transfer the dreams, hopes and expectations among common masses so that they may know the struggle of freedom fighters and boost their enthusiasm for building a new self-reliant (Atma Nirbhar) India free of economic and social inequality. She urged the gathering to keep National Integration and Patriotism above all other emotions.

Principal, JNV, Basohli appreciated the efforts of Central Bureau of Communication, Jammu for organizing the Multi-Media Exhibition at JNV Basohli. It is an initiative through which present day youth and children will find a connection with their freedom national heroes, he added. He also appealed to the visitors and locals to spread the message of visiting the exhibition.

Joint Director, CBC, J&K, Ghulam Abbas,  in his welcome address informed about working and organization of the Central Bureau of Communication, Ministry of Information & Broadcasting Government of India. He said that this exhibition by CBC, Jammu is an effort to make the youth of J&K aware about the initiatives, aims and objectives of ‘Azadi ka Amrit Mahotsav. He said that various exhibits of this multimedia exhibition are designed to enrich the visitors with valour filled Independence struggle, contribution of freedom fighters of India and J&K, significant events of Freedom struggle, About present day achievements and policies of Government of India through visuals, interactive panels and live cultural programmes.

On the occasion, BDC  Chairperson and other guests paid floral tribute to the National Heroes.

A theme based cultural programme was presented by troupes of CBC Jammu.