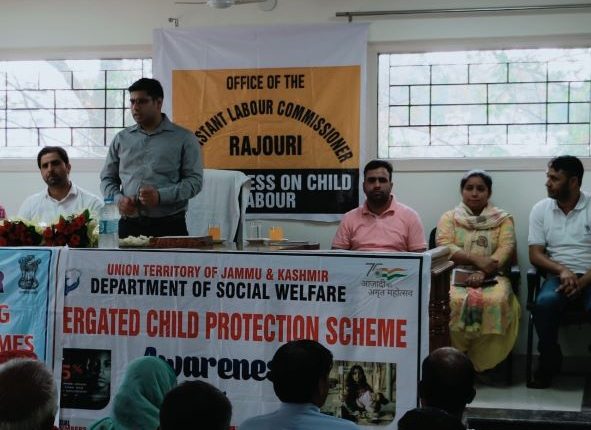 RAJOURI, JUNE 20: The awareness activities under the aegis of International Child Labour Elimination Week culminated in Rajouri today with a grand program organised here in the office of the Assistant Labour Commissioner.

The programme was presided over by the Deputy Commissioner Rajouri, Vikas Kundal.

Among the others, President MC Rajouri, Mohammad Arief; ALC, Manisha; DSWO, Wakeel Ahmed Bhatt among others were present at the event.

It is pertinent to mention here that National Commission for Protection of Child Rights (NCPCR) is observing the elimination of child labour week to mark the World child labour elimination Day across the country.

In his address, the Deputy Commissioner appealed to the general public to send their children to school and not for work.

Highlighting the need for community participation to stop child labour, the DC appealed to the public to participate in the Government’s efforts to eradicate child labour in the district.

He also made it clear that stern action under law would be taken against the persons violating the child labour laws.

Earlier, District Social Welfare Officer, Wakeel Ahmed Bhatt, while speaking at the event, highlighted a number of measures taken by the District Administration to stop the child labour in the district. He also briefed the participants about the objectives of the international child labour awareness week and said that a number of activities were organised in the district during the week.

Assistant Labour Commissioner, Manisha also highlighted a number of schemes being implemented by the labour department for the welfare of the labour community and urged them to avail the benefits of the same.

President MC Rajouri, Mohd Arief underlined the negative consequences of child labour and appealed to the public to support the Govt to eliminate the child labour.