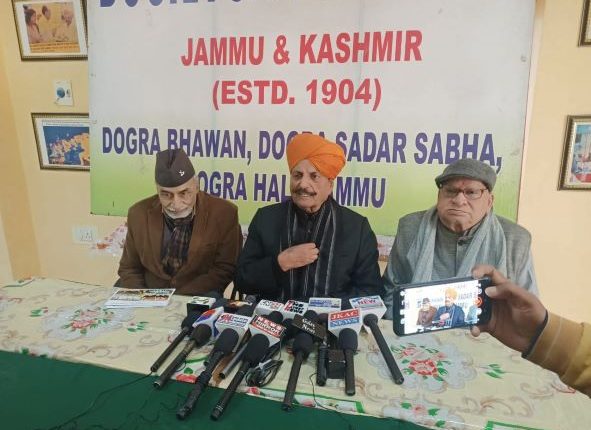 24-01-2023 : Alarmed with the recent reports from  Joshimath and in the backdrop of the Chamoli disaster earlier, the executive committee of Dogra Sadar Sabha (DSS) has appealed to the Hon’ble Lt Governor Shri Manoj Sinha to constitute and invite an Experts’ Committee to Ramban district at the earliest to review adhoc execution of works being carried out on haphazard road and rail alignments that are causing extensive damage to houses and agricultural lands of hundreds of residents of nearby villages, besides forest lands in the district under NH 44 National Highway Widening Project and stated that a man-made disaster, similar to the recent one in Joshimath in Uttrakhand, is staring into the face in Ramban district as accelerated and unabated landslides and sinking agricultural and forest lands have caused cracks in the walls of hundreds of houses, shops, commercial establishments and temples in villages of Dalwas, Dharmond, Nashri, Kunfer, Peerah, Chanderkote, Karole, Nera, Seri etc.,

Shri Gulchain Singh Charak, Former minister and President DSS addressing a press conference along with Executive Committee members of the DSS said that residents of Chanderkote -Ramban area have been complaining of execution of Project works, not by the officially engaged company, but by the unqualified contractors to whom the job has been outsourced by it. Even the alignments have been made at several places out of political considerations for inclusion and exclusion of villages and not based on technical study.

Shri Charak appealed to the Hon’ble LG Shri Manoj Sinha and the Hon’ble Highways and Transport Minister of the Union Government Shri Nitin Gadkari to “constitute an appropriate and empowered committee to have a detailed appraisal, unbiased supervision and monitoring of ongoing works to fix responsibility for losses and to accelerate provision of due compensation/ relief and permanent accommodation to adversely affected families. besides suggesting corrective measures”.

in Uttrakhand While conveying heartfelt sympathies with thousands of hapless residents of Joshimath affected by widening cracks in their houses and agricultural fields and roads, house collapses, Shri Charak hailed Government of India for readily constituting a Committee to conduct a rapid study of the occurrence of land subsidence and its impact in the Joshimath region of Uttrakhand.

Shri Charak said that he had already written to the Hon’ble Lt Governor and Hon’ble Highways and Transport Minister about the grim situation in Ramban district which had deprived hundreds of residents of their livelihood and has repeatedly brought the issue to the notice of the concerned district and divisional level authorities on several occasions, but little heed has been paid to our concerns.

Shri Charak further said that huge debris (mulba) excavated with the use of heavy machinery and explosives for ruthless cutting of earth along steep mountain slopes during the road widening project is being thrown straightaway into River Chenab giving an open invitation to serious floods that may occur due to blockade of the flow of waters in River Chenab. He pointed out that in Dalwas village, houses were seen with the earth cut and removed from about 60 ft. vertically beneath the foundations, while the retaining walls constructed were quite insufficient.

Shri Charak said that inadequate relief and compensation was provided to some affected families and initially the District Development Commissioner, Ramban and Tehsildar Batote had provided some temporary accommodation to affected families in government schools and the Company’s quarters at Dalwas, but no soccour came later and no compensation was paid to them. There was an undue delay in release of Compensation to other Land Owners (Zamindarans) whose land was acquired by the government for link roads and other Road Construction during 2007 – 2010 under NABARD projects. He added that the contributors of land had approached Revenue Authorities of Distt. Ramban many a times for early release of pending dues, but the matter continues to be delayed on one pretext or the other.

Shri Charak emphasised that if the slopes and fragile soils of the Shivaliks and Peer Panchal ranges of the Himalayas and the hills of Jammu region are not taken care of properly and at the earliest, the unplanned and ill executed road and railway line construction works through excessive use of explosives and JCBs will continue to bring greater disasters.

Shri Charak stressed that regular landslides are leading to excessive loss of fuel, trade and hours of journey and danger level of expected damages is on manifold increase.

The rampant deforestation in the name of clearing the road alignment is unchecked and rampant, with no reforestation plans in sight, either by contracted agencies or the forest department. There seems to be no ‘Relief and Disaster Management Policy’ to deal with any such foreseeable calamity.

Shri Charak further stated that though there is a pressing need to construct good roads, improve last village connectivity, construct hydel-projects and other necessary infrastructure to meet the requirements of ever increasing population, visitors, tourists’ traffic and development, but there is also an urgent need to make proper plans and execute works properly to avert disasters.