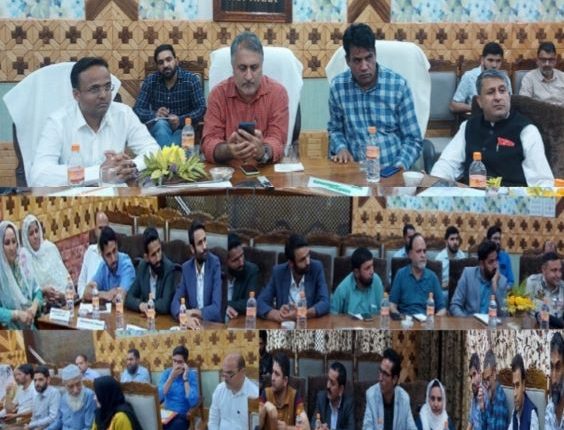 KUPWARA, SEPTEMBER 22: Principal Secretary, Skill Development Department, Dr. Asgar Hassan Samoon, today had a day long visit of Kupwara district during which he carried out series of activities and reviewed development profile of the district with PRIs and administration.

Dr. Asgar Samoon, who is also Mentor Secretary for Kupwara, convened a joint meeting of PRIs and officers of district administration and reviewed developmental projects being executed in the district.

Deputy Commissioner briefed the Principal Secretary about the developmental profile of the district.

During the meeting, Dr. Asgar Hassan Samoon received detailed feedback about development activities from the PRIs. He talked to various heads of the departments over phone including Chief Engineer PHE, Chief Engineer R&B, Director Health Services Kashmir and Director Animal Husbandry and resolved several issues on spot which were projected by the PRIs. He also asked to Heads of the departments to personally visit the district to resolve the issues on spot.

Responding to issues projected by Chairman DDC Kupwara regarding Lumpy Skin Disease (LSD), Principal Secretary had a detailed review from the Director Animal Husbandry telephonically. He was informed that the required medicines have already been ordered and will reach Kupwara within next 2 to 3 days. He was informed that over 20000 vaccines have been administered to the animals, so far. He was also informed that there are 763 cases of LSD in the district and so far 42 deaths have been recorded. He directed the Chief Animal Husbandry Officer to reduce the animal mortality rate by intensifying treatment and healthcare facilities.

He asked the Director to focus on development of dairy sector as it has vast potential and scope in the district.

Regarding scarcity of water supply projected by various PRIs, Principal Secretary stressed the need for channelizing water resources in a better way adding that Kupwara district has no shortage of water resources.

Regarding functioning of Kashmir University campus, Dr. Samoon said that the issue would be discussed with concerned authorities for redressal. He also asked DDC members and BDC Chairpersons to bring into his notice all major issues facing the district so that the same could be taken up with the concerned authorities and hence redressed.

Regarding demand projected by President MC Langate on drainage project, Dr. Samoon talked to Chief Engineer R&B and asked him to see into the issue of technical sanction to Rs.5 crore drainage project Handwara. He also asked him to visit Kupwara on 24th of this month to resolve various other issues on the spot besides ensuring macadamization of Kupwara and Handwara towns.

The issue of administrative approval to Bus Stands Handwara and Kupwara was also resolved on the spot. Other issues including construction of ongoing Court Complex Handwara was also telephonically put up with the concerned higher authorities.

Earlier, Chairman DDC Kupwara and Vice Chairman DDC besides DDC members and BDC Chairpersons projected their issues. They informed the Principal Secretary that various developmental works have been completed and they are thankful to the Deputy Commissioner for his prompt approach towards resolution of public grievances.