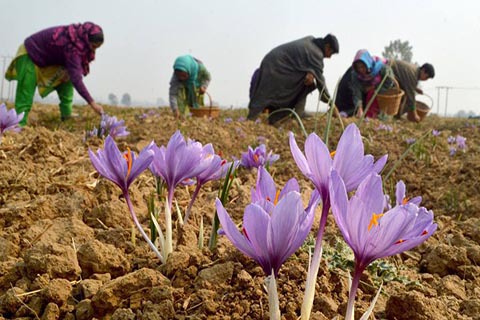 SRINAGAR, JUNE 21: To give a boost to saffron production in Kashmir, J&K Government has launched new initiatives including the introduction of GI Tagging.

GI sign is used on products that have a specific geographical origin and possess qualities or a reputation that are due to that origin.

Saffron growers are hopeful that they will now get a better price for their produce after the introduction of  GI tag to the saffron grown here. Kashmiri Saffron is grown at an altitude of 1,600 m to 1,800 m above mean sea level, which adds to its uniqueness and differentiates it from other saffron varieties available across the world.

Iran is the largest producer of saffron in the world and India is a close competitor. However, with the GI tag of Kashmir saffron, India becomes the only Saffron producing Country for which GI has been assigned which will result in more prominence in the export market thereby  boosting exports as well as help the farmers to get best remunerative price for economic sustainability.

The GI Certification would also cease the prevalent adulteration of Saffron and will put an end to the marketing of Saffron cultivated in other countries under the garb of being produced in Kashmir which otherwise was defeating the economic interests of the farmers associated with this crop.

Highlighting the importance of preserving the unique identity of Kashmiri Saffron, an official of Agriculture Department said that Kashmir is having a distinction of producing one of the best saffron in the world, therefore it is our individual/collective and moral responsibility to preserve this golden spice not only for a large number of families directly associated with the cultivation of saffron but for our generations to come.

Saffron, despite its price, is in high demand for its antioxidant properties. It carries a hefty price tag also because the process of converting crocus flowers into the thread-like spice is painstaking and labour-intensive as it takes around 160,000 flowers to yield a kilogram of saffron.

Kashmiri saffron is of superior quality because of the higher concentration of crocin, a carotenoid pigment that gives saffron its colour and medicinal value. Its crocin content is 8.72% compared to the Iranian variant’s 6.82%, , giving it a darker colour and enhanced medicinal value.

Kashmiri Saffron is renowned globally as a spice. It rejuvenates health and is used in cosmetics and for medicinal purposes. It has been associated with traditional Kashmiri cuisine and represents the rich cultural heritage of the region. The unique characteristics of Kashmir saffron are its longer and thicker stigmas, natural deep-red colour, high aroma, bitter flavour, chemical-free processing, and high quantity of crocin (colouring strength), safranal (flavour) and picrocrocin (bitterness).

Remarkably, a new saffron park has been started just for the sole purpose of processing and promoting the sale of saffron from Kashmir Valley.  The samples brought by growers are tested here. The lab is recognised across the world.  There are 8 parameters that are  tested, which are internationally recognized.  The 8 parameters include moisture, extraneous matter and foreign matter, and total ash and three main characteristics. They are graded and then e-auctioned. The farmers get the flowers and then the stigma separation and vacuum drying is done at the Dusoo Park.

Traditionally the farmers used to dry the saffron under shade at home but due to that, the saffron used to lose the main components. Now all the parameters are saved to get the best grade, an official of the Saffron Park said.

With the GI tag, saffron growers and traders are getting more benefits like legal protection to the products as well as prevention of unauthorized use of GI tag products by others.