Utilizing film as a media to communicate science can be a powerful way to reach out mass audience: Director 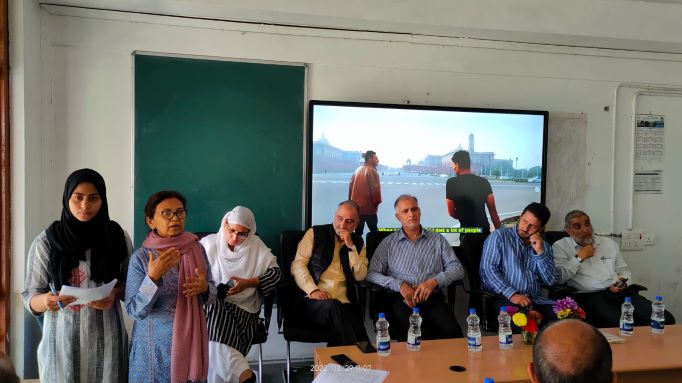 The event was presided over by Director NIT Srinagar, Prof. (Dr.) Rakesh Sehgal and he was the chief guest for the valedictory section.

In his key address, Prof Sehgal said the primary objective of the workshop was the promotion of Science Communication skills among the students and its importance in context with modern research.

“Narrating stories through visuals is an important medium of communication and youth should come forward to take the lead on the subject.

Prof. Sehgal said by making short films they can analyze their skill and enhance their performance of presenting their work. This can boost their confidence to face the big opportunities and makes them fearless about their self-consciousness and shine their personality, he said.

“Educational film can easily be used as a powerful tool in classrooms around the world.  It is the practice of informing, educating, raising awareness of science-related topics, and increasing the sense of wonder about scientific discoveries and arguments,” he said.

Welcoming the guests Dr. M A Shah, Head, PG Department of Physics said that films are the most powerful tools for communicating science to the general public.

“This workshop could help to promote a new generation of scientists-as-filmmakers and stimulate other others to design specific programs for training students in science filmmaking, thereby communication and reaching to larger audiences,” he said.

Dr. Shah advised the scholars and students of the Department to make films of their work regular phenomena so that newcomers could benefit.

Prof S Rubab Coordinator of Programme, gave a brief outlook of the programme in context with New Education Policy.

On the occasion, an Independent filmmaker of Kashmir, Mr. Jalal-ud-din Baba said whether it is newly published scientific research, or one is trying to promote scientific awareness for conservation purposes, choosing a short film about the topic is a great way to get involved in outreach and education.

Speaking during the workshop, the resource person Mr. Jalal-ud-din Baba Independent filmmaker of Kashmir said films should play an active role in the social transformation of any particular region.

He said that filmmaking is all about teamwork where individuals who possess different skills and expertise in the field come together.

A formal vote of thanks was delivered by Prof P A Ganaie, who thanked Prof Sehgal, Prof Liman Prof Niyaz for attending the program.

In the inaugural program educationist, Dr Rafiq Masoodi and former Additional Director of AIR Srinagar spoke about his long experience. He advised students that new technologies could reach to public if the work is presented properly.

On the occasion, prominent journalist, Nadim Nazir highlighted the importance of films in education. He said Independent filmmakers of Kashmir there are many occasions where we have to learn scientific phenomena.

During the workshop, the research scholars present their research work in the form of short movies of 5-10 minutes before the participants where they visualize their work easily and preliminary work of filmmaking was carried in the Nanotechnology Laboratory.

A formal vote of thanks was delivered by Dr. Harkirat Singh. He expressed his gratitude to the former director of Radio Kashmir Mr. Rafiq Masoodi, resource person Mr. Jalal-ud-din, Registrar Prof. Bukhari, and other dignitaries.

Prof. M A Shah thanked his staff for making the inaugural program of the day successful, and preliminary work of filmmaking was carried in Nanotechnology Laboratory.

This event has made students and scholars realize the fact that science is not about being a bookworm, it’s more fun and creative if they can approach the filmmaking of their work.

Apart from the workshop was attended by people of non-science backgrounds and they found it interesting to communicate they realized that there is always an upper hand in science in every field of life.

Alia Bhatt will introduce a collection of maternity clothing

Return of cinema in Kashmir to boost local economy, promote film shootings across…