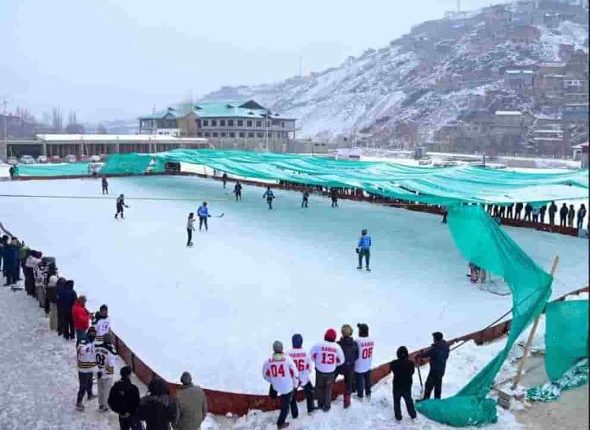 Share
Kargil, Jan 11, 2023: Acting Chairman/CEC, LAHDC, Kargil, Er Punchok Tashi today inaugurated the 14th CEC Ice Hockey Championship organized by Department of Youth Services and Sports, Kargil at Khree Sultan Cho Sports Stadium Bemathang, Kargil.
EC Health, LAHDC, Kargil, Mohsin Ali, SE Irrigation and Flood Control, Maqbool Hussain, District Youth Services Sports Officer (DYSSO) Kargil, Abid Ali, District Officers, participating teams besides concerned officers were present at the inaugural ceremony.
While briefing about the history of the Ice Hockey Cup, the Acting CEC said the idea to organize such an event was initiated in 2008. He said it is overwhelming to see the participation of young players in the district over the past 14 years.
Tashi urged the youth to participate in the game as Ladakh’s climatic conditions are favorable to play this game in natural temperature without much capital and infrastructure.
The Acting CEC said the Artificial Ice Hockey Rink, which is being constructed at Rs 35 crore, will be completed soon and will be dedicated to the athletes.
He said the rink will be an opportunity for players to play the game throughout the year which will increase their chances to excel at the national and international platforms.
EC Mohsin advised the athletes to display exemplary sportsmanship and expressed satisfaction over the participation of women teams in the tournament.
The EC said after the formation of Ladakh as a Union Territory funds in sports have increased manifold. He said opportunities to represent the UT at various national and international platforms have also increased. Mohsin urged the athletes to take advantage of these opportunities and dedicate themselves in their respective sports.
Earlier, DYSSO Abdi Ali presented welcome speech and said the 27 teams, participating in the 8-day long tournament, include four women teams.
Pertinently, Goshan Drass Red won the inaugural match against Hockey Club Wakha with a margin of 3-1 goals. Bodh Kharbo won over DHC Leh by one goal through penalty shoot and Friends Pashkum A won over City Sports Club Drass with margin of 6-0 goals.
14th CEC Ice Hockey Cup
Share