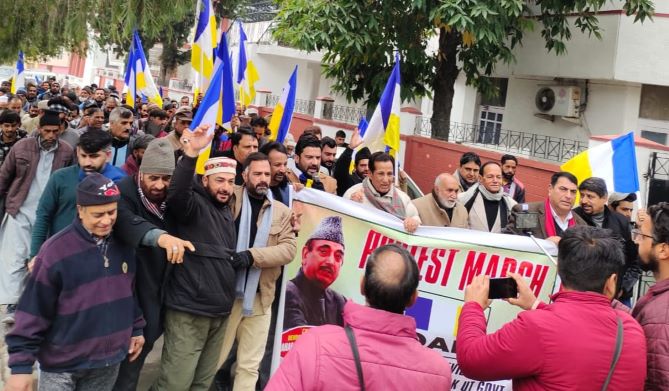 Rajouri, Jan 23: Resolving to continue their efforts politically to secure the land rights of people, DAP on Monday held a massive public protest at Rajouri. Hundreds of DAP leaders, workers marched towards the Deputy commissioner office and submitted the memorandum in presence of General Secretary R.S.Chib, Jugal Kishore Sharma Provincial President, Salman Nizami Chief Spokesperson, Ashok Sharma Ex MLA,  District President Sushil Sharma, Masood Choudhary Secretary, Zahid Malik Zonal President, Add Spokesperson Sanam Shah urging authorities not to trouble people in winters and revoke the land eviction order. “DAP is fighting for the people of Jammu and Kashmir and it will continue to fight as long as our rights are not secured and guaranteed by the government,” R.S.Chib said. The DAP workers & leaders criticized the UT government for its anti people policies and said that the centre government shall immediately hold the elections in Jammu and Kashmir.

They said in the presence of a non-elected government, the people suffer a lot and every day people are served fresh notifications by the officers making their life miserable.

DAP said that as long the present dispensation prevails in the UT, the people will continue to suffer. “The only solution to address the woes of common people is to have elections in Jammu and Kashmir. Once we have an elected government in office, that has the constitutional mandate to frame the public policies. These executive orders have no space in democratic set ups,” Chief Spokesperson Salman Nizami said.  DAP workers threatened to continue the peaceful protests across the Union Territory if the land eviction order is not revoked. “Our position is the same as the observations of the Supreme Court. That is why we demand a white paper from the government to ensure no poor are suffering and becoming homeless by the anti people land eviction diktat”. Ever since the order of land eviction  was issued by the government, the DAP is holding protests across all regions of UT outside district headquarters. It also held the two mega protest rallies in Jammu and Srinagar following the instructions of party Chief Ghulam Nabi Azad.