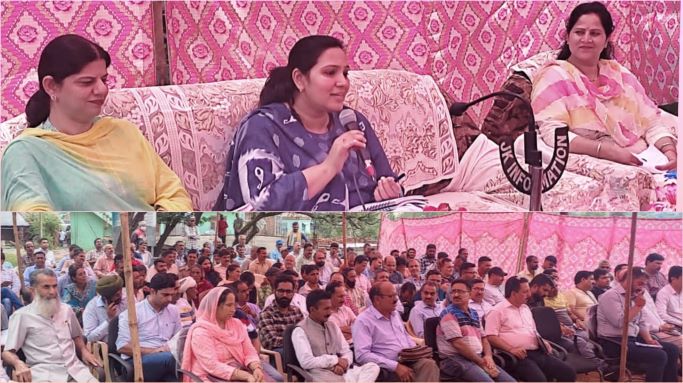 The DC asked the SDM Basantgarh to make arrangements for the transport system on the other side of the sinking area to facilitate supply of essentials and traveling of people by transshipment.

DDC Councillor,  Ashri Devi,  Sarpanches, Panches, besides a large number of general public hailing from   adjoining panchayats of Block Kulwanta     projected several demands and  problems being faced by them. They demanded meeting of  shortage of drinking water supply, posting  of adequate staff in the Educational institutions,  Maintenance of  roads under PMGSY and PWD sector , Construction of bridge over Shatrari Nallah, Sanctioning of electric poles, Providing  facility of electricity and drinking water at tourist place RC Peak, Upgradation of High School Kulwanta to HSS, Detachment of teachers working in other departments, Establishment of Grid Station at Kulwanta block HQ, Sanctioning of new road from Kaitha to Gadholu Chandi Mata Mandir, Road clearance from Kulwanta to Basantgarh, Shifting of electric wires from High School Kulwanta, Construction of  boundary wall, Dilapidated condition of Ramnagar to Dudu Basantgarh road, Inclusion of RC peak in tourism map etc.

While interacting with the public, the DC said that the main objective of the Block Divas is to take a firsthand appraisal of important issues at grassroots level.  The DC added that such platforms enable District administration to know the multifaceted problems being faced by the general public.  She informed that these outreach camps help reach governance at the doorsteps of the public which improves public service delivery mechanism.

During the programme, many grievances were redressed on the spot by seeking intervention of the concerned departments. The DC asked the officers to educate the people about income generating and beneficiary oriented schemes launched by Government of India and UT Govt.

After concluding the block diwas, the DC handed over maize sheller to beneficiaries provided under Capex budget 2022-23 and distributed KCC Pass books among the farmers.

The Deputy Commissioner also inspected the development works being executed by RDD under capex budget at Panchayat Incha.  Executing agencies were directed to expedite the progress and ensure timely completion.

Later, the DC also visited the Gandhtop and inspected the restoration of traffic movement from Ramnagar to Basantgarh area of District Udhampur.

It is pertinent to mention here that road connectivity from Ramnagar to Basantgarh was disrupted due to heavy land slide at Gandh Top and sinking of a road stretch.

The DC asked the SDM Basantgarh to make arrangements for the transport system on the other side of the sinking area to facilitate supply of essentials and traveling of people by transshipment.

The DC also interacted with the local public of the area and listened to their grievances and assured them of all possible help on behalf of the district administration to overcome the situation. The DC asked the executing agencies to gear up men and machinery to remove landslides from Ramnagar Basantgarh  and ensure traffic worthy roads.