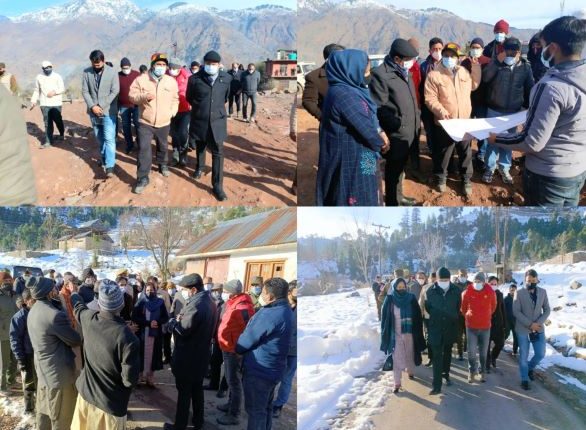 During his visit to Sangaldan and Banihal, the Div Com appreciated the District Administration for taking effective measure to restore the essential services and supplies in the district. He   impressed upon the departments to improve response time in rural areas to ensure minimum inconvenience to the people in such situation.

He took detailed review of pace of progress on restoration of damaged roads and snow clearance work. The SE PWD briefed the Divisional Commissioner about the status of restoration work on the roads across the district.

Dr Langer directed the PWD and PMGSY Department to ensure snow and road clearance on remaining 160 km roads of their respective departments.

The Div com informed that total 1560 distribution transformers have been installed in the district out of which 95 are under restoration and directions have been issued to make these functional at the earliest.

He directed the concerned officers to monitor the situation closely and ensure that the essential services are made available in all areas especially rural and hilly areas.

The Div Com & ADGP Traffic also inspected status of NH-44 and directed National Highway Authority of India to clear the landslides on war footing especially at Mehar near Ramban, to fully restore the road.

The Div Com also inspected newly constructed 50 bedded hospital building and 300 LPM Oxygen Generation Plant at Banihal and directed concerned authorities to make it functional as soon as possible to facilitate the locals.

The Div Com visited Power Receiving Station Sangaldan and Dalwa-Budhan Road and took stock of progress on snow clearance of all link roads.

While interacting with the PRIs and locals in Sangaldan, the Div Com enquired about the status of essential services and supplies especially Ration Supplies. The delegations put for their demands for their resolution. The delegations demanded early completion of Higher Secondary School raod dalwa,  Snow cutters for sub Division Gool and Banihal, Black toping in Sangaldan market and other issues of public concern.

The Div Com passed on the spot directions to the concerned officers to resolve all the genuine demands on priority. He asked DC Ramban to project requisition of snow cutter machinery to concern authorities.

The Div Com also inspected Railway Station Yard at Sangaldan and took stock of the progress. Senior officials of IRCON & KRCL briefed the Div Com regarding key milestones of this project of National importance.

The demand for establishment of bus stand at new identified place and car parking and related issues were also projected.

The Div Com also chaired a review meeting at Banihal and took stock of progress on major schemes, besides status of restoration works.

During the meeting the DC gave a brief on measures taken by the administration to expedite the restoration works across the district.

Dr Langer stressed on the officers /Officials to ensure their presence at their respective Stations / Headquarters in view of snow season so that any untoward situation can be dealt with effectively.