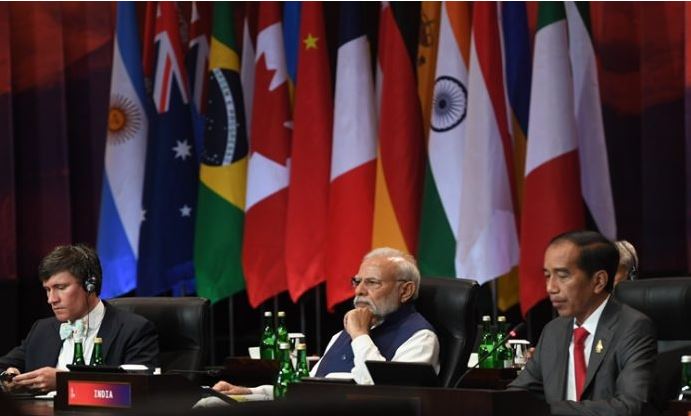 16-11-2022 : Prime Minister Narendra Modi has emphasized the rapid growth of public digital infrastructure to eliminate the digital divide. He was speaking at the third working session on the theme ‘Digital Transformation on the second day of the G20 Summit in Bali today.

The Prime Minister said, India will work jointly with G20 partners to spread the benefit of digital technology in the life of every human being. He said data for development will be a key element during India’s presidency of G20 next year.

He said, it is the responsibility of G-20 leaders that the benefits of digital transformation should not be confined to a small part of the human race.

Mr. Modi asked the world leaders to take a pledge to bring digital transformation in the life of every human being in the next ten years so that no person in the world will be deprived of the benefits of digital technology.

He stressed that these benefits will be realized only when digital access is truly inclusive and widespread. He said, digital transformation is the most remarkable change of our era and the proper use of digital technologies can become a force multiplier in the decades-long global fight against poverty and climate change.

Talking about the digital transformation initiatives in India, Mr. Modi said, the country’s experience of the past few years has shown that socio-economic transformation can be brought about with inclusive digital architecture.

He said digital use can bring scale and speed and transparency can be brought in governance. He said India has developed digital public goods whose basic architecture has in-built democratic principles.

These solutions are based on open source, open APIs, and open standards, which are interoperable and public. Giving the example of a Unified Payment Interface, he said, over 40 percent of the world’s real-time payment transactions took place through UPI last year.

He said, 460 million new bank accounts have been opened in the country on the basis of digital identity, making India a global leader in financial inclusion. He said citizens of most developing countries of the world do not have any kind of digital identity and only 50 countries have digital payment systems.

Meanwhile, Prime Minister Narendra Modi and French President Emmanuel Macron today held a bilateral meeting on the sidelines of the G20 Summit in Bali. He is also scheduled to have bilateral meetings with the leaders of Indonesia, Spain, Singapore, Germany, Italy, Australia, and the United Kingdom.

Time Magazine’s 2022 Person of the Year: Volodymyr Zelensky and “Spirit of Ukraine”