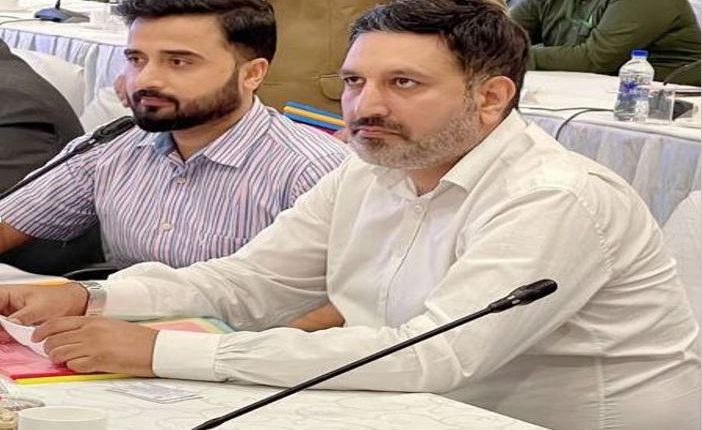 06-01-2022: The meeting was attended by  Sheikh Ashiq Ahmad, President,   Office Bearers and other members of  KCC&I. In this virtual meeting, the presentation was given by Mr. Virendra Mongia, Regional Head, India Exim Bank regarding Bank’s new Initiatives & other programs. Mr. Virendra Mongia briefed about the  History and future programme / collaboration of the Bank. He stated that India Exim Bank established under an act of Parliament is the country’s Export Credit Agency, providing Medium and Long-Term (MLT) facilities mainly in Foreign Currency to sovereign governments, parastatal agencies, Indian Exporters / Companies. India Exim Bank offers financing under various programmes to promote exports from the country.

India Exim Bank has taken/is in the process of taking, certain new initiatives towards (i) supporting SMEs and (ii) boosting exports from the country, by a collaborative association with the Indian FIs / Scheduled Commercial Banks (SCBs) / other stakeholders like Export Promotion Councils and Trade & Industry Associations as detailed below:-

President, Sheikh Ashiq Ahmad stated that the India  Exim Bank should organize meetings and physical awareness camps in collaboration with KCC&I  in future so that we can encourage young entrepreneurs, women entrepreneurs and all  export businesses so that the present poor condition of exports gets improved in the coming years. Mr. Ashiq also stressed on the role of young entrepreneurs in the export sector and various benefits for earnings in foreign exchange. It is pertinent to mention here that our exports from J&K have declined to around 600 Crores which is the worst performance in the last few decades. President  appealed  all the members present in the meeting to use their good offices  for the promotion  of  exports from the region

Farooq Amin, Secretary-General, KCC&I presented a vote of thanks to all the officials and   Mr. Virendra Mongia, Regional Head, India Exim Bank, members of KCC&I for sharing such fruitful information and giving time for the betterment of the trade Community of J&K.