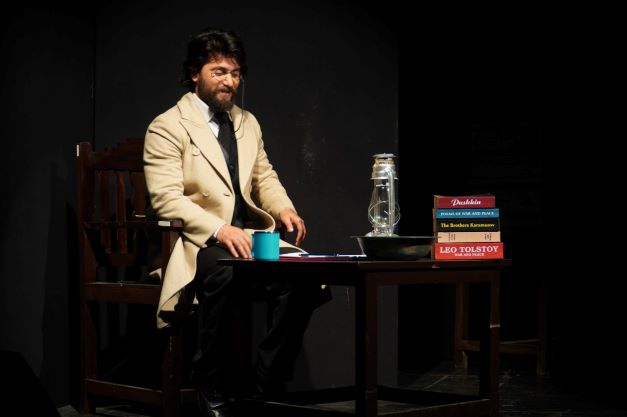 Share
17th January, 2023:On the 2nd day of the ongoing National Theatre Festival named 2nd Theatre Carnival, Ras Kala Manch Haryana today presented play Chekhov Ki Duniya, a theatrical adaptation of four stories written by great Russian writer Anton Chekhov. The stories were translated in Hindi by Ranjit Kapur and were directed by seasonal director Ravi Mohan. Organized by Natraj Natya Kunj, cultural society Jammu (regd.) and supported by Ministry of Culture, Government of India, Indian Council For Cultural Relations J&K, Jammu & Kashmir Academy Of Art Culture & Languages, Punjab Sangeet Natak Akademi & Haryana Kala Parishad, today’s performance is based on four stories named Chhink, Surgery, The Seduction and Bank Manager, performed over 2 hours, deal with a gamut of human emotions, relationships, power play, sublime love of common man and every day to exceptional circumstances from the abyss of poverty to idle game of the rich. This play mainly compels the audiences to mull how worse the present days to stay happily. As the doyen of psychology, Sigmund Freud claims that “although an individual may be unable to recall the memory, it may still affect the individual through subconscious influences on behavior and emotional responding”.
Ist story named Chhink is a Story about a guy who works in the forest department as a clerk. A middle-class man who loves watching theater plays. Story tells us about the difference between the middle class and upper class. 2nd story Surgery is the story of Kuryatin who is an assistant chief doctor in the clinic. Today the doctor is outside and, in his absence, suddenly the church father who suffered from toothache came into the clinic and met Kuryatin who desperately wants to do his first Surgery. After a thorough inspection, he decided to remove his teeth. Will he be able to do it? Third story, ” Seduction is about a man named Peter whose first task is to seduce women. What makes this difference is his behavior. Can a man attract a woman in the absence of a mutual glance or without talking or even writing letters to her?
Last story, A Defenseless Creature, takes place in the premises of a bank where Everyone was working smoothly in the bank until she entered. Her husband was fired from work and not paid his dues. Instead of going to their office for recovery she came to a Bank asking the bank manager to pay that amount.  The Bank Manager is already suffering from pain in his leg. Will he pay that?
Speaking on the occasion chief guest Padma Shri Balwant Thakur congratulated the team of Natraj Natya Kunj Jammu for organizing such a big event. He said it’s high time that we should preserve our art and culture through these kinds of cultural events. He appreciated the Team of Ras Kala Manch Haryana for presenting this kind of scintillating performance at Abhinav Theatre Jammu.
2nd National Theatre CarnivalRas Kala Manch Haryana
Share