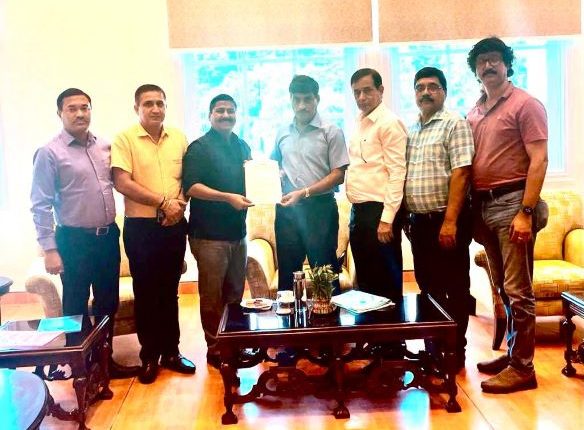 19-08-2022 : A delegation of Chamber of Commerce and Industries (CCI) led by its General Secretary Gaurav Gupta met Chief Secretary A K Mehta and highlighted various demands of the traders and industrialists besides the common masses of Jammu.

At the outset of the meeting, Gaurav raised the issue of unnecessary harassment of traders by way of anti-encroachment drive by JMC whereby the concerned authorities were penalizing those shopkeepers who have placed their goods well within the yellow line drawn by the same civic body. He said that the JMC is harassing the traders for no fault of theirs and requested the Chief Secretary to intervene and stop this injustice henceforth.

On the issue of Smart City, the CCI General Secretary hailed PM Narendra Modi and J&K administration for giving preference to Jammu but on the other hand he asked the stakeholders not to venture in the walled city as the scope is marginal due to congestion and any change in the existing set-up will affect the established businesses which is undesirable.

The CCI also demanded inclusion of separate clause of Land Value / Stamp Duty for Industrial Units on the lines of other states claiming that existing commercial notified rates are too high.

CCI deputation demanded extension in validity period beyond June 30, 2022 upto at least one year for the industrial units which could not commence production within the stipulated time due to several genuine reasons.

The CCI delegation also asked for revisiting the Excise Policy to accommodate the old licensees who lost their source of income and were rendered jobless. It was also demanded that the policy be revised in such a manner  to ensure Local Trade & Business Guarantee as per the sentiments of the people of the region.

Further the CCI demanded extension of VAT Amnesty Scheme as the traders couldn’t avail this earlier due to COVID-19 lockdown. The delegation said that tourism was declared as an industry in 1995 but the hotels and lodges were deprived of the benefits and now the tourism department has asked for renewal of licenses on annual basis thereby causing discrimination. The delegation also highlighted the issue of proposed hike in power tariff, which has the potential to break the back bone of the industry and therefore it was appealed to stop any such move to help sustain industry in J&K.

Another important issue which came for discussion was declaration of Gair Mumkin Khud by the Revenue Department despite the fact that no water body is passing through these lands. It was apprised that registration and construction activities on these lands was barred therefore there is  need to redefine  the “Kism” of this type of land and also a policy to allow the commercial  and construction activities on such land chunks. As the period of lease deeds in respect of some allottees in Sabzi Mandi and Fruit Mandi Narwal have expired, therefore the Chamber appealed that their lease deeds should be renewed further after charging minimum possible premium.

The issue of some commercial shops in Bahu Plaza area which have been allotted to some persons but the possession of the aforesaid shops has not been given to the concern allottees  and   lease deeds are also pending was also raised and it was demanded that possession should be given and lease deeds be executed henceforth.

The CCI also demanded an exclusive power amnesty scheme for commercial users viz traders and industrialists apart from the one which has been offered to the domestic users.

The CCI demanded amendment in Change in Land Use notification as people are ruing the change carried out in last December. The traders’ body also demanded for a daily Retreat Ceremony at Suchetgarh BOP to promote tourism. Another vital issue which came for discussion was the Excise Policy.

The Chief Secretary gave a patient hearing to the visiting delegation and assured for early consideration of the aforesaid issues.