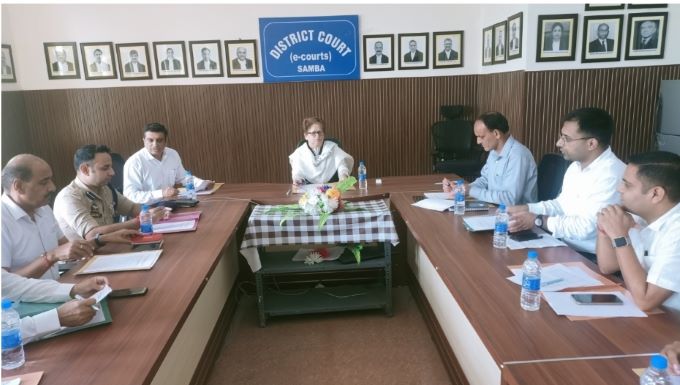 SAMBA, SEPTEMBER 22: On the directions of the  High Court of Jammu & Kashmir and Ladakh, a meeting of the Coordination Committee for Justice Delivery System was today held for the quarter July-September 2022 here  in the District Court Complex, Samba.

The meeting was chaired by Sonia Gupta, Principal District & Sessions Judge, Samba and attended by Arvind Sharma, Chief Judicial Magistrate Samba, besides the officers from Police and Civil Administration.

Threadbare discussion on the issues concerning ways and means for effective, efficient and timely rendering of justice to the litigants, the infrastructural and security issues faced by the Judicial Institutions in Samba District; and ways and means for developing and improving the system as a whole were held.

The Principal District & Sessions Judge, Samba called upon all the stakeholders to work in tandem to strengthen the justice delivery system and to maximize the judicial output. She emphasized   the participants to streamline the coordination among the Courts and other stakeholders for developing and improving the judicial system and urged them to provide assistance pertaining to the justice delivery system. Several issues were discussed and effective solutions were worked out to enhance the efficiency level of the judicial system at the district.

Arvind Sharma, CJM Samba, Secretary for the Coordination Committee, reviewed the action taken on minutes of meetings and stressed for follow up on all the issues raised in the meeting.