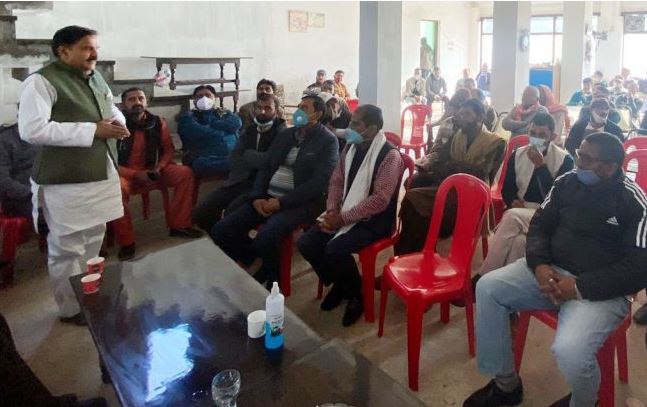 Majalta, 12-01-2022: “Post Re-organization era has witnesses a massive slow down in J&K with development taking a back seat and growing unemployment becoming more pronounced. The dismantling of J&K state has adversely impacted the trade, tourism and economy of the erstwhile princely dogra state of the country. There is an all-round dis-enchantment amongst the people who were caught unawares on August 5, 2019 when the BJP led govt at the centre all of a sudden announced Re-organization of J&K and its division into two Union Territories”. This was stated by Mr. Harsh Dev Singh Chairman-JKNPP and former Minister while addressing public meetings in Thalora and Bharnara in Tehsil Majalta today.

“While the economy fast dissipated and development came to a grinding halt, the ever growing unemployment seemed to be the only notable feature of the saffron rule. The past few years witnessed massive public uprisings against the anti Jammu and anti people policies of the ruling dispensation which continued to be suppressed through iron fist of police and civil administration. Taking repeated somersaults on almost all its professed promises, the narcissistically pleased and power intoxicated BJP continued to use the coercive apparatus of state to silence all those who dared raise their voice for justice and sought fulfilment of promises made by it during elections. Rather than honouring the commitments made by it during elections, it was trying to crush the dissenting voices by causing dissensions in and breaking the opposition parties. Describing the BJP’s handling of dissent and disquiet as oppressively bizarre, undemocratic and morally sinister, Mr. Singh appealed to the workers not to succumb before the machiavellian designs of the power hungry politicians. He said that NPP leadership shall stand with its people through thick and thin and continue to expose and oppose the BJP for its political debauchery and subterfuge”, asserted Harsh.

Addressing the huge gatherings, Mr. Harsh Dev lambasted the BJP for having done the greatest disservice to J&K by demoting it to the level of UT. It has humiliated the dogras by dismantling the oldest dogra state. The extension of several draconian laws after abrogation of Art 370 including opening of lands and jobs to outsiders had in particular, come as a rude shocker for the people of J&K. The survival of small traders has been threatened by the proposed entry of corporates, business tycoons and big stores in the UT. The unemployed youth of Jammu region have been the most disappointed lot with their share in services have been abysmally reduced. The Daily wagers, the contractuals, the underemployed have all felt cheated in BJP regime.

Alleging that a deep rooted culture of corruption was prevalent in the UT, Mr. Singh called upon the vigilante organizations to keep a close watch over the functioning of various Deptts particularly PHE, Revenue, Education, Power and RDD. He said that the lackadaisical approach of the concerned authorities was responsible for power and drinking water crisis in majority of the rural areas. He regretted the non-payment of relief to farmers whose lands were acquired for construction of PMGSY roads during the past 6-7 years. Several houses on the alignment of the said roads were forcibly dismantled without paying a penny as compensation despite the funds have been sanctioned for the same years back.