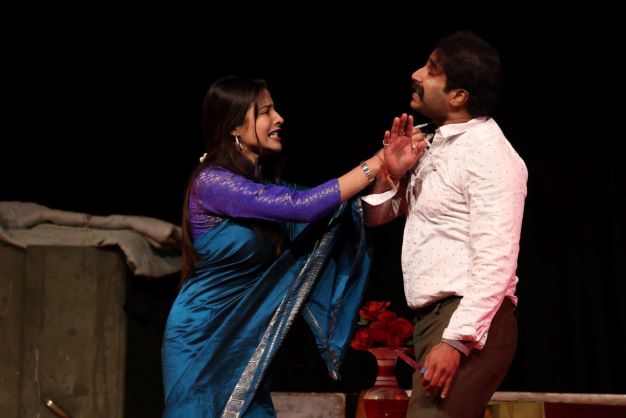 Jammu 20th January, 2023: On the Fifth day of ongoing National Theatre Festival titled 2nd Theatre Carnival, Natrang Jammu presented the play Kasak originally written by Shailesh, Hindustani adaptation by Rohit Verma, designed and directed by Rahul Singh. Padma Shri Balwant Thakur was the Special Guest on the occasion who praised all the actors of the play for presenting such a wonderful show and also underlined the serious efforts done by the energetic team of Natraj Natya Kunj Jammu towards preserving and promoting art and culture of the union territory and harnessing the artists and bringing others states performing groups to J&K.

Organized by Natraj Natya Kunj, cultural society Jammu (regd.) and supported by Ministry of Culture, Government of India, Indian Council for Cultural Relations J&K, Jammu & Kashmir Academy Of Art Culture & Languages, Punjab Sangeet Natak Akademi & Haryana Kala Parishad, today’s play opens up with a tragic scene of Rajnikaant Patel who is an alcoholic. He is drooling in a nerve-racking dream where he is dreaming about his wife and his child being murdered. He further calls his wife, as suspected he is in rehab trying hard to leave alcohol. Suddenly he hears the loud scream of his wife and the child being brutally murdered through the phone. In the next scene he plots a plan against Pratap Thapa, the police officer who had convicted him for the murder case of his wife and the child. He very cleverly plans to take revenge from him and his girlfriend Chandrima Desai, who is a writer and has written a false fiction story on his story playing with the sentiments of Rajnikaant . A helpless man who had lost his family and is made to believe that he had murdered his wife and the child by the officer. He calls the officer at his false home with a false identity to take revenge from him and makes him believe that he has a son who does smuggling and he needs his help to save him. On the other hand he also called Chandrima Desai and made her believe that his wife is fighting cancer and wants to meet her as a last wish being a fan of her writing. He keeps her waiting and puzzling up her mind and telling her things about her personal life making her feel astonished. Rajnikant leaves to find the tablets of his wife and in the mean time Pratap enters back. Chandrima and Pratap are astonished to see each other in the same place and with different false reasons. They try to figure out why this man is playing tricks with them and then Rajnikant enters he admits that whatever he is doing is a lie and keeps its secret about why is he is doing it. On Partap’s urgency to know what could be the reason behind this entire drama he discloses about his wife’s and child’s murder and how abruptly he was kept behind the bars convicted for this and then he successfully murders himself with Pratap’s fingerprints on the knife leaving both of them guilty, he dies. The magnificent actors who performed in the play were Arti Bhagat as Chandrima Desai, Goutam Sharma as Pratap Thapa and Rahul Singh as Rajnikant. Voice over was given by Meenakshi Bhagat and Sanket Bhagat. The music of the play as rendered by Brijesh Avtar Sharma whereas  lights were executed by Shivam Singh.