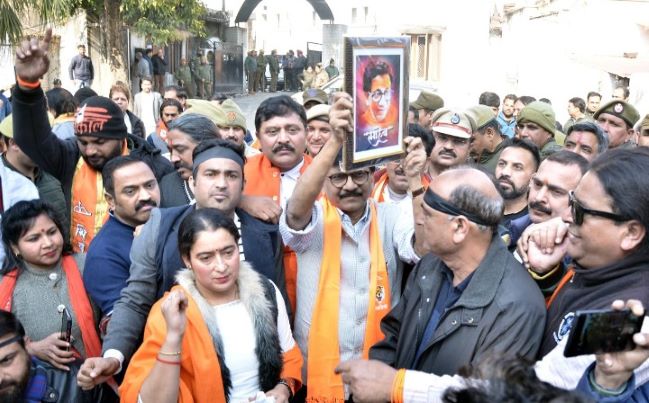 Share
JAMMU: Shiv Sena (UBT) leader and Rajya Sabha MP Sanjay Raut today met with protesting Kashmiri Hindu employees posted in Kashmir valley under PM package and assured to raise their issued in the Parliament.
Pertinent to mention that the Kashmir Hindi employees are on protest for the last 256 days in Jammu since the target killings are on rise in Kashmir Valley, seeking their transfer to safer places in Jammu.
Talking to reporters here, the Member Parliament Raut said that the Central Government is continuously doing politics in the name of Kashmiri Hindus across the country, but today when they are again in terror since the targeted killings are on rise in J&K, the government is not paying heed to burning demands of protesting Kashmir Hindi.
Raut said that he would raise the issue of the problems of these employees not only in Parliament but also in front of the Prime Minister and the Home Minister during the upcoming Parliament session after discussing the matter with Party’s Chief Uddhav Thackeray on this serious issue. He said that Maharashtra and Shiv Sena have always been with Kashmiri Pandits and will continue to be together.
The Member Parliament said that the Uddhav Thackeray instructed him to make all possible efforts for providing relief to the protesting Kashmiri Hindus. During this, Kashmiri Pandits, while talking to Sanjay Raut in Marathi language, informed about their demands. The protest site echoed with slogans of “Jai Shivaji Maharaj”, “Long live Balasaheb Thackeray”.
After this, the Shiv Sena MP left for Kathua to participate in the Bharat Jodo Yatra. MP Raut, who arrived with Shiv Sena Jammu and Kashmir President Manish Sahni, promised to strongly raise the demands of the PM package Hindu employees who are protesting in front of the Relief Commissioner’s office.
During this, the employees said that the government cannot suppress our protest. They demanded that their withheld salaries for last six months should be released and they should be transferred from Kashmir to Jammu without any further delay.
Manish Sahni, who was present on the occasion, apprised Sanjay Raut about the current situation of employees in the Valley.
Earlier, the Shiv Sainiks warmly welcomed Sanjay Raut at Jammu Airport, Bari Brahman, Samba and Hira Nagar.
Vows to raise KPs issues in the Parliament
Share