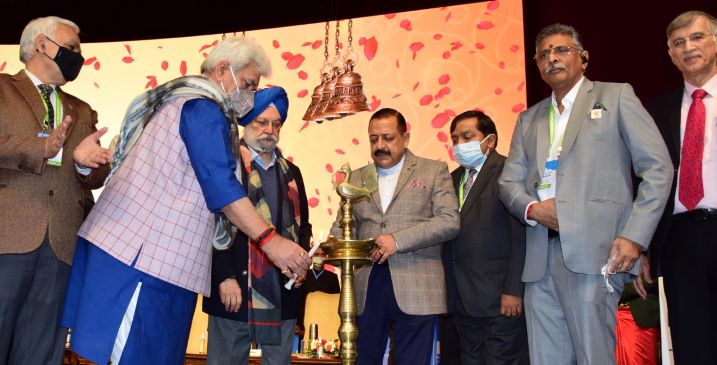 During his address, the Union Minister, Sh. Hardeep Singh Puri said that Real Estate, being the second largest employer in the country will create innumerable opportunities for economic growth in J&K.

The natural endowments in the UT of J&K and resilience of its people are second to none in the world which now need to be translated into economic development, prosperity and ease of living, said the Union Minister.

Last few years have seen tremendous change in terms of good governance, delivering development & transforming the infrastructure of the UT. Barriers to businesses in J&K have been removed. The UT of Jammu & Kashmir is now an attractive place to do business and invest, said the Lt Governor.

The Lt Governor announced that the next ‘Real Estate Summit’ will be organized in Srinagar on 21st and 22nd May 2022 Development of local businesses is imperative in scripting the growth story of J&K. Besides national players in real estate, local developers of J&K will also be at the focus of this new dawn of development of real estate sector in the UT, he added.

The multiplier effect of the first-ever Real Estate Summit in J&K will be felt across the entire UT in coming years, added the Lt Governor.

Highlighting the key features of the Model Tenancy Act which was adopted today by the government, the Lt Governor said that the Act has been prepared with the objective of balancing the interests and rights of both, the landlord and tenant, and to create an accountable and transparent ecosystem for renting the premises in an efficient manner.

Owning a house is the dream for everyone and we are making a committed effort to bring it into reality. The launch of many portals including RERA portal, Housing Portal, integrated auction portal will facilitate a transparent and accountable framework in Real Estate Sector. Such initiatives will help both Developers and Homebuyers as one-stop portal for all their needs, said the Lt Governor.

We have also launched three Housing Schemes today under which about 1000 EWS apartments (under PMAY) and another 150 MIG and HIG apartments are being launched. Many more would be launched in the coming months, added the Lt Governor.

The Lt Governor said that the regressive land laws were amended providing relief to many sectors from farming to industries, education, real estate, hospitals and IT. Several progressive policies and procedural reforms have been implemented on the ground.  The best single-window Clearance System and every possible support of the government will be ensured to facilitate the investors, he added.

Recently, we have made changes in the Land Use Policy so that the companies eager to set up industries do not face the problem of land, said the Lt Governor.

Despite being endowed with immense natural wealth, business opportunities and excellent human capital, the progress of the industries in J&K were stalled. Since, 5th August 2019, J&K is undergoing a massive transformation, and Industries from all over the country are seeing Jammu and Kashmir as their preferred destination for investments and business ventures, observed the Lt Governor.

Efforts of Hon’ble Prime Minister and Hon’ble Home Minister are yielding favorable results with the new Industrial Development Scheme attracting huge investments in J&K. Within a year, we have received the proposals for investment worth Rs 44,000 crore. By March 2022, we will be able to bring an investment of Rs 60,000 crore to Jammu and Kashmir, said the Lt Governor.

In Jammu and Kashmir alone, Rs 1 lakh crore is being spent on highways, tunnels, and related infrastructure, due to which the nature of urban infrastructure will be completely transformed within two-three years, added the Lt Governor.

Speaking on the occasion, Sh. Durga Shanker Mishra, Secretary, Ministry of Housing & Urban Affairs (MoHUA), said that a paradigm shift in terms of development has been witnessed in every sector in J&K. The real estate sector will create a plethora of opportunities for the people of the UT in terms of employment, investment etc, he added.

Sh Niranjan Hiranandani, Vice Chairman NAREDCO India noted that – Incentivization by the Central and the UT Government will go a long way in accelerating the real estate growth in Jammu & Kashmir.

On the occasion, the Government of J&K signed an MoU on skilling with the National Real Estate Development Council (NAREDCO) under which NAREDCO will 10,000 thousand workers in various skills of the construction industry–electrical, plumbing, masonry, carpentry, and the likes.

A coffee table book capturing the true essence of the new J&K was also released.