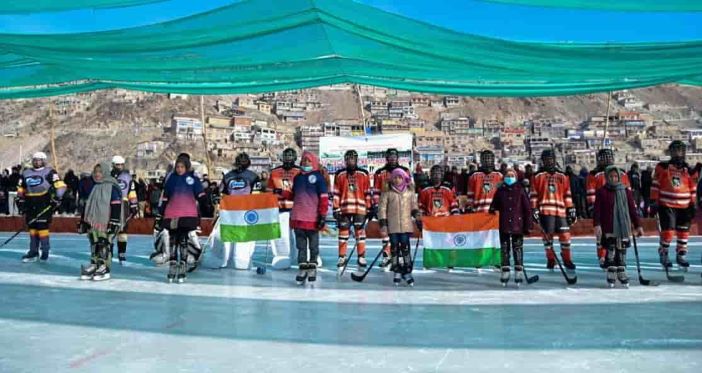 Share
Kargil, Jan 18, 2023: The District Level Ice Hockey Championship organized by District Youth Service and Sports Kargil concluded today here at Khree Sultan Cho Stadium, Bemathang Kargil despite the bone-chilling cold.
Chairman/CEC, LAHDC, Kargil, Feroz Ahmad Khan was the chief guest, Executive Councilor RD, Tourism and Zanskar Affairs, Er. Punchok Tashi, EC Health Mohsin Ali, Deputy Commissioner/CEO, LAHDC, Kargil, Santosh Sukhadeve, who was the guest of honour, Chairperson Haj Committee UT Ladakh, Ali Majaz, District Youth Service and Sports Officer, Abid Ali besides other officers/officials were present on the occasion.
While speaking on the occasion, the CEC hailed the efforts of both winning teams that lead them to the final of the tournament. He also appreciated the efforts of women’s teams who took part in the tournament.
The CEC said in the future, the tournament will be played not only at the UT level but also at the national and international level for which the Council will provide all possible support to every team.
Khan said the Ice Hockey Rinks are being constructed in every block of the district and two large Ice Hockey Rinks are also under construction and will be ready next year. He said LAHDC is committed to helping the young talent of Ladakh to national and international platforms.
The CEC congratulated the teams who played final in the tournament and announced a full set of Ice Hockey to the Friends Pushkum A for being winner of the tournament.
Earlier, the final match started with the national anthem followed by the welcome speech by DYSSO Kargil. He briefed about the tournament that started on January 11, 2023. A total of 27 teams took part in the tournament which includes 23 men and four women teams.
The first final of the tournament was played between Wakha Mulbek and Down Hill Kargil in the women’s category. The second final was played between Friends Pushkum A and Humus Drass in the men’s category.
The first final was won by Down Hill Kargil in the women’s category with 3:0 ratio against Wakha Mulbek. Similarly, the second final was won by Friends Pushkum A with 3:1 ratio and gave tough competition to Humus Drass.
During the tournament, several volunteers announced prizes of Rs 5000 to Rs 10,000 for Friends Pushkum A for their best efforts that helped them to lead in the final match.
In the end, an award and prize distribution ceremony was held in which Sarfaraz Ahmad from Friends Pushkum A was declared as player of the match and player of the series and was rewarded with a cash prize of Rs 3000 and Rs 5000 respectively.
Similarly, a cash prize of Rs 3000 and Rs 5000 was given to Sameena Bano from Down Hill Kargil and was declared player of the match and player of the series respectively.
Cash prize of Rs 50,000 was given to Friends Pushkum A and Rs 50,000 to Down Hill Kargil.
Similarly, Rs 30,000 each was given to Humus Drass and Wakha Mulbek for being runner-ups. Besides, cash prizes, mementos and certificates were also given to players.
Ice Hockey tournament concludes in Kargil
Share