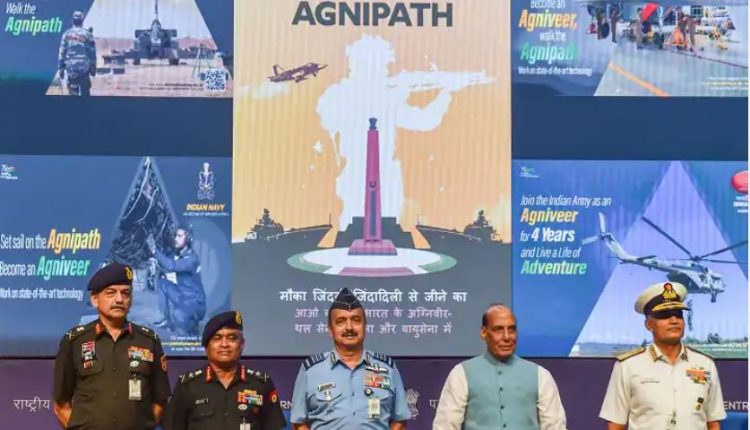 16-06-2022 : In the midst of persistent demonstrations over the new military recruitment scheme ‘Agnipath,’ the Centre on Thursday issued a one-time concession in the proposal’s maximum age limit, which was raised from 21 to 23 years. According to the Defence Ministry, the decision was made since no recruiting had occurred in the previous two years.

“Consequent to the commencement of the  AGNIPATH scheme, the entry age for all new recruits in the Armed Forces has been fixed as 17 ½  – 21 years of age,” the ministry said.

Several states including Bihar, Uttar Pradesh, Haryana, Madhya Pradesh and others witnessed strong protests by Army aspirants over the rollout of the military recruitment scheme.

Trains were set afire and blocked, and public vehicles attacked as protests over ‘Agnipath’ scheme swept across several places in different parts of the country. The arson were witnessed amid partisan political voices in favour and against the new recruitment scheme for the defence forces that has set off a firestorm.

Railway property was vandalised and protesters set fire to stationary carriages at Bihar’s Bhabhua and Chhapra stations and smashed window panes of coaches at many places.

Over 34 trains were cancelled and eight more partially cancelled due to the protests and delays in the Railway Recruitment Board (RRB) exams, railway sources said in New Delhi.

Meanwhile, the government issued a clarification, asserting that the new model will not only bring in fresh capabilities to the armed forces but also open up avenues for youth in the private sector and help them become entrepreneurs with the aid of the severence package they will be entitled to on retirement.

“The scheme will bring in new dynamism to the armed forces. It will help the forces bring in new capabilities and take advantage of the technical skills and fresh thinking of the youths… It will allow the youths to serve the nation,” the Press Information Bureau said in a Facebook post.

Referring to the financial package of around Rs 11.71 lakh to be given to each of the recruits at the end of the four-year tenure from the ‘Seva Nidhi Package’, it said it will provide financial independence to the youth and even help them venture into entrepreneurship.

Political parties, predictably, reacted along partisan lines with the Opposition stepping up its attack on the government and demanding that the scheme be scrapped