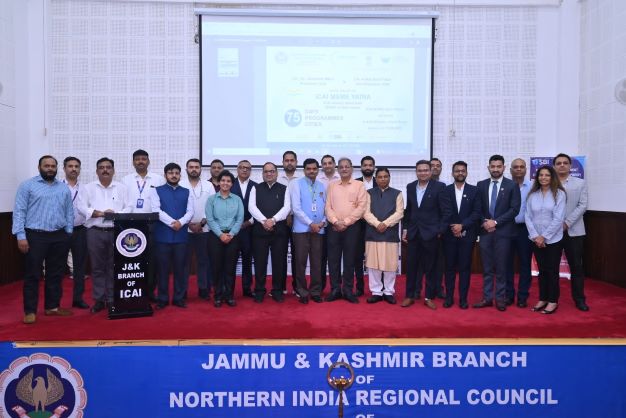 JAMMU: The Chartered Accountants play an eminent role in nation-building as their expertise is used in various fields to bring about desired changes in the development process.

This was stated by senior BJP leader and former Deputy Chief Minister Kavinder Gupta while addressing an impressive gathering during a ICAI MSME Yatra taken out as part of the 75th Azadi ka Amrit Mahotsav by the Committee on MSME and Start-Up of The Institute of Chartered Accountants of India (ICAI) with the support of J&K branch of NIRC of ICAI.

Kavinder Gupta, who was the chief guest on the occasion, along with Sat Sharma, senior BJP leader, and former minister and members of ICAI has received the aforesaid Yatra in Jammu which commenced its journey on August 18, 2022, from Mumbai and shall be covering the entire nation in a period of 75 days. Today on the 33rd day of the Yatra, the Jammu and Kashmir Branch of NIRC of ICAI organized an interactive session at ICAI Bhawan Canal Road, wherein various programme partners shared their presentations highlighting all the various schemes/benefits available to MSMEs.

The former Deputy Chief Minister said that over one crore MSMEs are there in the country and if one MSME will give employment to ten people then there is a scope of generating over 10 crore jobs, which is an achievable target and the stakeholders should think on these lines to counter joblessness.

Kavinder said that in this way the MSMEs can play a significant role in nation building and the CAs which are the backbones of the successful MSMEs should also contribute to envisaging things and policies to ensure that the country touches the pinnacle of progress and surmount all problems with great ease. He said that the participation of Chartered Accountants in every field whether it is related to budget forecasting, tax planning, preparation of books of accounts, capital budgeting, financing, or any other activity is vital as their expert knowledge is required in every area.

Kavinder said that CAs should also contribute in unearthing the black money by various means as this will help the country to progress by leaps and bounds. He said that black money holders are acting as bottlenecks in the development process and by giving them the golden advice to stop this practice CAs can prove to be real game changers as far as the journey of the country towards progress is concerned.

Further, the Committee on MSME and Start-Up of The Institute of Chartered Accountants of India (ICAI) with the support of the J&K branch of NIRC of ICAI celebrated the 75th Azadi ka Amrit Mahotsav by hosting ICAI MSME YATRA. The Yatra commenced on18thAugust 2022 from Mumbai and shall travel for 75 continuous days covering the whole country. The yatra entered its 33rd day and on this occasion, a programme has been hosted by The Jammu and Kashmir Branch of NIRC of ICAI at ICAI Bhawan Canal Road, wherein an interactive session was organized in which various programme partners shared their presentations highlighting all the various schemes/benefits available to MSMEs. Nakul Saraf, Chairman, The J&K Branch of NIRC of ICAI while welcoming the dignitaries, presented the formal welcome note.

The programme provided a platform wherein Sh.Sanwal Dogra representative from SIDBI, Sh. Puneet Sharma from NSIC, Sh. Rajesh Kumar from MSME DFO and Sh. D P Singh and Sh. Ankush Khajuria from SBI highlighted in detail all the beneficial Schemes available to both existing and new MSMEs. Dheeraj Kumar Khandelwal, Chairman, and CA. (Dr.) Raj Chawla, Vice Chairman Committee on MSME and Start-Up, ICAI appraised the gathering about the various initiatives and benefits of various schemes provided by different channel partners of the ICAI. Further, Govt Nominee Central Council Member of ICAI, Adv Vijay Kumar Jhalani appreciated the efforts of the Committee on MSME and Startup and also appraised the gathering that on the recommendation and complaints lodged by the branch, a report has been submitted to the CAG office against the Sham CA firms that are operating in the UT of J & K.

The chief guest of the occasion Sh. Kavinder Gupta Ji, former Deputy Chief Minister & speaker of our erstwhile State Legislative Assembly and worthy guest of honour Sh. CA. Sat Sharma Ji, former State President BJP & MLA Jammu West were also present and appreciated the initiatives taken by ICAI for the benefit of various institutes who can reach out to individuals take holders across the nook and corner of the country. He assured full support to ICAI for fulfilling the objective of this whole event. Vishal Thappa presented a detailed presentation on the various benefits of UDYAM Registration and PMEGP Scheme. CA Vineet Kohli, Secretary J&K Branchconducted the proceedings, and CA. Vikas Purdhani, Vice Chairman of the J&K Branch, presented the formal vote of thanks. CA. Ayush Sawhney, Treasurer, CA. Priya Seht, CA. Sourav Pargal, Executive Members along with other members of the profession and representatives from various channel partners also graced the event.