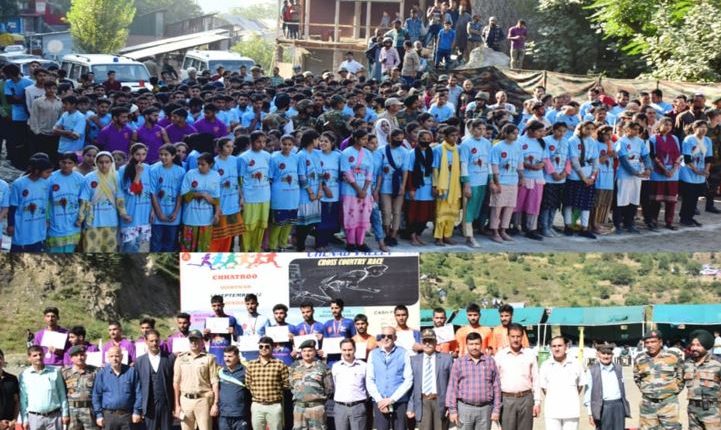 KISHTWAR, SEPTEMBER 18: To reaffirm its commitment towards fostering peace and also to provide an impetus to the sporting talent in the region of Doda, Kishtwar and Ramban districts, in line with Khelo India initiative, Indian Army today  organised Chenab Valley Cross Country Race at Chhatroo of District Kishtwar.

The aim of this event was to inculcate and further promote sports spirit, identify and nurture the talent for higher levels.

Three types of Races were conducted as part of the event. The 12 Km Cross Country Race witnessed participation for a total of eight teams from Doda, Kishtwar and Ramban districts. The competitive spirit, zeal and vigour of the youth was praiseworthy right from participation till the culmination of the run.

All participants were felicitated with Medal, Certificate and Prizes.

‘Run for Unity’ was conducted for Girls and Boys, with an aim to motivate Youth to take up Athletics and Sports, owing to immense potential they have. It was open to Boys and Girls over 15 years of age. Youths showed passion and grit during the run and a total of 253 youth were part of the run including 107 girls and 146 boys. The enthusiasm of Veterans was also commendable. Top 3 runners among Boys, Girls and Veterans were given Medals, Merit Certificate and Prizes viz  Bicycle for 1st winner, Mobile Phone for 2nd and Wrist Watch for 3rd. The winners in Girls category were Tamanna Thakur of Chas, Neha Kumari of Chas and Insha Wani of Mughal Maidan, while in Boys category, the winners were Moien Malik of Chhatroo, Ashok of Chas and Mohd Yousuf of Chhatroo. And the winners in the Veterans category were Sunil Kumar of Thakrai, Suresh Kumar of Saroor and Rajinder Kumar of Thakrai.