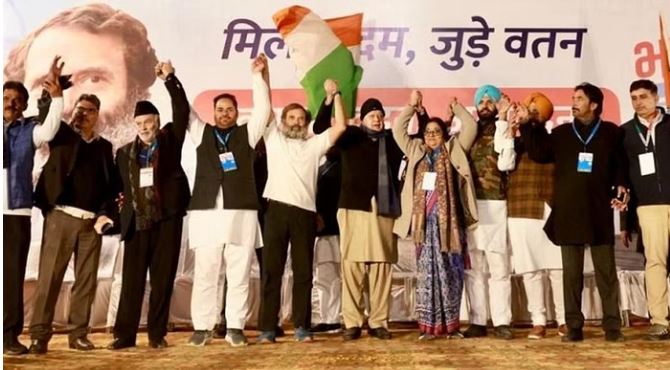 19-01-2023 : Congress leader Rahul Gandhi on Thursday likened the march towards Jammu and Kashmir as ‘returning to home’ and urged the people of the region to support him in his mission to ‘save India’ from the government’s mass pickpocketing, which he claims is being done by diverting the attention of the countrymen. Gandhi, who was speaking at a gathering of around 2000 people in Lakhanpur, also stated that he was there to share the grief of the people of Jammu and Kashmir who have suffered on many fronts in past decades. He was joined by NC President Farooq Abdullah, senior Congress leaders Digvijay Singh, Jairam Ramesh, Rajasthan Chief Minister Ashok Gehlot, Punjab MP Pratap Singh Bajwa, Shiv Sena MP Sanjay Raut, and senior leaders from J&K Congress. Gandhi accused the government of carrying out a mass pickpocketing exercise by diverting the attention of the countrymen and blamed the BJP and RSS for spreading hatred in the country.

He also criticized the media for not highlighting important issues and instead focusing on topics such as Bollywood stars Aishwarya Rai and Akshay Kumar. Gandhi said that there are two India’s being carved out of Hindustan, one for the common citizens and the other for a few billionaires. He also spoke about the Bharat Jodo Yatra, a journey that he and his colleagues began months ago from Kanyakumari, and how they were not feeling tired because people were pushing them forward. He emphasized the importance of unity and helping one another, regardless of religion or language. Overall, Gandhi’s speech focused on the issues of hatred, violence, unemployment, and price rise, and how they need to be addressed in order to create a better future for the country.

Gandhi also touched on the recent developments in Jammu and Kashmir and how they have affected the people living there. He spoke about how the government’s actions have caused immense pain and suffering to the people and how they have been denied their basic rights. He also highlighted the importance of restoring the autonomy of the region and ensuring that the voices of the people are heard.

Furthermore, Gandhi spoke about the economic situation in the country and how it has been impacted by the government’s policies. He pointed out that small businesses and traders have been burdened with a number of taxes and that the government has not done enough to support them during the ongoing economic crisis. He also criticized the government for not creating enough jobs and for not doing enough to address the issue of unemployment.

Gandhi also spoke about the importance of education and how it is crucial for the development of the country. He emphasized that education is the key to creating a better future for the people and that the government needs to invest more in education to ensure that all citizens have access to quality education. He also spoke about the need for better healthcare and how the government needs to do more to improve the healthcare system in the country.

Overall, Gandhi’s speech focused on the various issues that are affecting the country and how they need to be addressed in order to create a better future for the people. He highlighted the importance of unity and helping one another, regardless of religion or language, and emphasized the need for the government to take urgent action to address the various issues that are impacting the country.