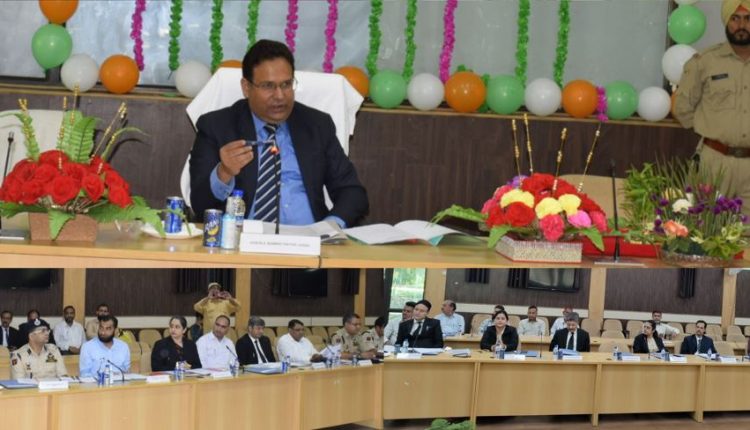 The Administrative Judge also distributed aid equipment including wheelchairs, scooties, hearing aids to vulnerable and marginalized sections of the society provided in collaboration with District Administration. His Lordship also planted medicinal ornamental plants at District Court Complex, Reasi and interacted with Bar Members who presented him a memorandum of demands.

Justice Waseem Sadiq Nargal also inspected the District Court Complex Reasi and Katra and monitored the Court proceedings. His Lordship also presided over the meeting of District Administration, Judicial Officers and Police to discuss the issues concerning the Administration of Justice.

In his address, Justice Waseem Sadiq Nargal stressed upon the Judicial Officers to ensure speedy delivery of justice and also imbibe the qualities of being patient, dignified, respectful and courteous to  Advocates, litigants and the witnesses whom they come across in their official work.

Justice Waseem Sadiq Nargal further added that all the organs of the District that is District Administration, Judiciary and Police have to work as a team for achieving the goal of effective administration of justice irrespective of caste, creed, race, religion, colour, language, gender etc. as administering Justice has two components, firstly “Rule of Law” and secondly “Access to Justice.” He further said that Access to justice is a crucial prerequisite for ensuring the rule of law, it is multi-dimensional as it envisages equity of access to Courts for all, effective representation for all and speedy disposal of disputes for all.

Justice Nargal stressed upon the Judicial Officers to make best use of the concept of e-courts in order to improve the efficiency of Administration. Being the Administrative Judge, his Lordship assured that they will take up the issues of development of Judicial infrastructure in District Courts with the concerned Higher authorities wherever requires.

Later, Justice Nargal also visited New Court Complex, Katra and directed the concerned authorities for expediting the construction work of District Court Complex, Katra on priority basis as Katra is situated at the foothills of Trikuta  Mountain which is a gateway to Vaishno Devi Shrine.