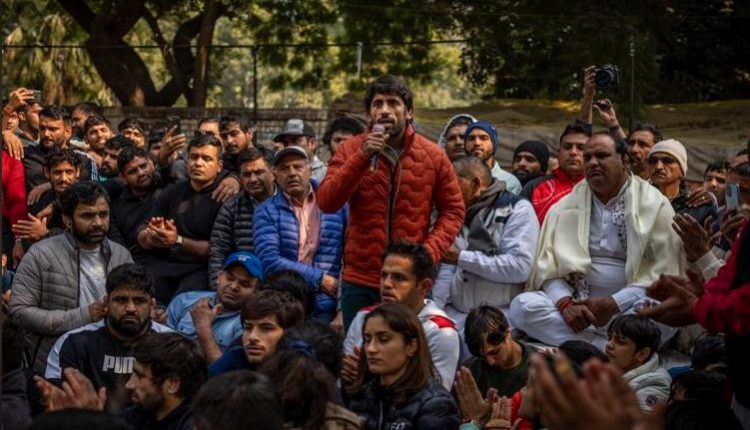 20-01-2023 : Bajrang Punia, Olympian wrestler and 2022 Commonwealth Games gold medallist on Friday said that they are fighting against the Wrestling Federation of India and appealed to Prime Minister Narendra Modi, Home Minister Amit Shah and Union Sports Minister Anurag Thakur to hear their demands.

Ace wrestlers Vinesh Phogat, Bajrang Punia, Sakshee Malikkh, Ravi Dahiya and Deepak Punia among other players have been participating in the protest against the Wrestling Federation Of India(WFI) and its chairman Brij Bhushan Saran Singh at Jantar Mantar in the national capital, which began on Wednesday.

Wrestlers have levelled charges of sexual harassment of women wrestlers by the WFI president and its coaches and of mismanagement in the functioning of the federation. They demanded a complete overhaul of the federation.

“We’re sad that the athletes have to sit here in protest leaving their practice. Our fight is only against the Wrestling Federation of India. We appeal to the PM, HM and Union Sports minister to hear our demands. WFI has given this fight a political turn,” Punia said at the Jantar Mantar in Delhi on day 3 of the protest.

He stated that the protesting wrestlers are waiting for WFI chief Brij Bhushan Sharan Singh to come forward and they are fighting for the young generation of wrestling.

“We’re waiting for Brij Bhushan Sharan Singh to come forward. We’re here by risking our careers. This fight is for our young wrestlers who’re the future of wrestling,” the 2022 CWG gold medallist said.

Before speaking to the media, the protesting wrestlers on Friday wrote a letter to PT Usha, President of the Indian Olympic Association on “sexual harassment” complaints against Wrestling Federation India chairman Brij Bhushan Saran Singh.

In a letter to the IOA president PT Usha, the star grapplers accused the WFI chairman of sexual exploitation and financial irregularities. Some wrestlers also had a late-night meeting with Union Sports Minister Anurag Thakur on the issue that stretched into the early hours of today.