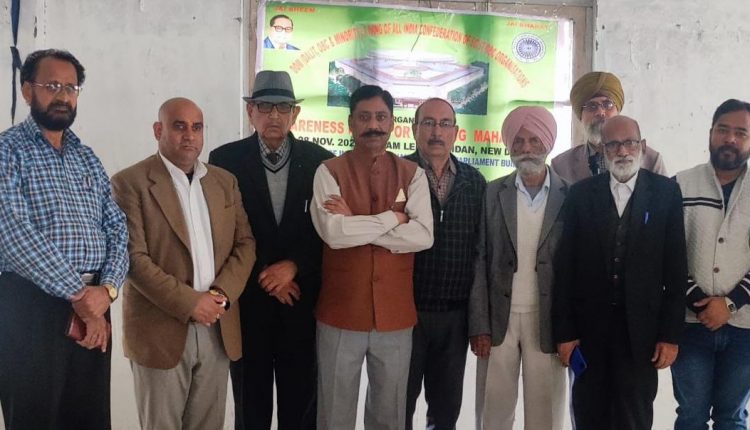 Share
Jammu, 19.11.22: Dalit OBC Minority (DOM), a wing of All India Confederation of SC/ST/OBC Organisations J&K organized an awareness meeting at Gurudwara Guru Nanak Dev Ji Auditorium, Chand Nagar Jammu, today for supporting the National Rally being organized by the Confederation at Ram Leela Maidan, New Delhi on 28th Nov 2022. The main agenda of the meeting was to pass a resolution to support the rally and support was shown unanimously by all those present for the meeting. People from all walks of life from J&K will participate in the National Rally at Delhi.
RK Kalsotra, chairperson DOM and President Confederation, said that the National Rally at Delhi is being organized to name the new Parliament Building as Dr. BR Ambedkar Parliament House. This will be a true tribute to the father of the Indian Constitution. He further added that various other agendas will be raised at the rally about SC/ST/OBC and minorities. These include the constant privatization of the government sectors and educational institutions across the nation. Moreover, there is also a threat to the multicultural and religious nature of Indian society by attacking the fundamental right of religion. All six fundamental rights are under a threat and the character of the Constitution is being changed. It is pertinent to unite, cutting across religious, caste, and creed lines and fighting to save the Constitution which enshrines equality rights for the downtrodden and minorities.
Thus, a resolution to support these issues at the National rally was presented and it was passed with full support.
Others who spoke and attended the meeting included S Kuldeep Singh Giani, Adv Jamil Qazmi, Er Hem Raj Phonsa, Ashu Peter Mattoo, Pastor Vicky Mooman, S Varinder Jeet Singh, S Kulwant Singh, Ramesh Sarmal, Rangesh Hans, Madan Lal, S Pritam Singh, Mohinder Karlopia, Ramesh Bhagat & Sat Pal.
DOM organised awareness meet
Share