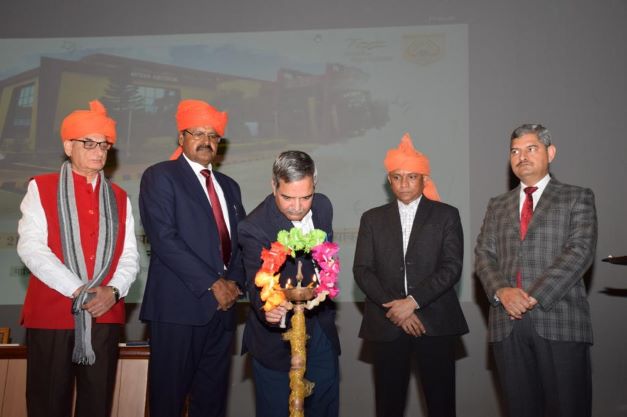 REASI, NOVEMBER 18: A two day conference on Dogri Literature organised by Shri Mata Vaishno Devi University, Katra in collaboration with Sahitya Akademi, New Delhi, was inaugurated on Friday at the Matrika Auditorium of the University.

Titled ‘Critical Appraisal and Evaluation of Dogri Novel of 20th and 21st Century’, the conference is being organised under the aegis of Azadi ka Amrit Mahotsav, and guidance of Ministry of Culture, GOI.

“Unless and until we don’t respect our languages we won’t be able to respect our culture and civilization and nation” VC, SMVDU said.

“Dogri represents the rich and vibrant culture of Jammu region and Akademi is making all efforts to encourage writing, publication and promotion of good quality literature,” he said.

Mohan Singh, Sahitya Academy Award winner for Dogri, passionately recalled the contribution of the Dogri writers during his keynote address. He said the languages are essential to bind the people together.

Nagendra Singh Jamwal, Registrar SMVDU, stressed on the need for making collective efforts to preserve and promote the Dogri language. He extolled the selfless contributions of eminent Dogri writers in nurturing, promoting and introducing Dogri beyond the boundaries of Jammu and Kashmir.

Narsingh Dev Jamwal, Padma Shri Awardee, and other eminent Dogri Writers and Poets, including Desh Bandhu Dogra Nutan and Om Goswami spoke about their novels during the first session of the conference.

In the second session of the first day, papers were presented by Rajinder Ranjha, Sunita Bhadwal and Jagdeep Dubey.

It was chaired by famous Dogri writer Prakash Premi.

V.K Bhatt, Dean, School of Humanities, SMVDU presented the Vote of Thanks at the conclusion of the first day of the conference. Isha Malhotra HoD School of Languages and Literature,  Dr Rakesh Thussu and Dr Kamini Pathania from Board of Cultural  Activities coordinated the event.