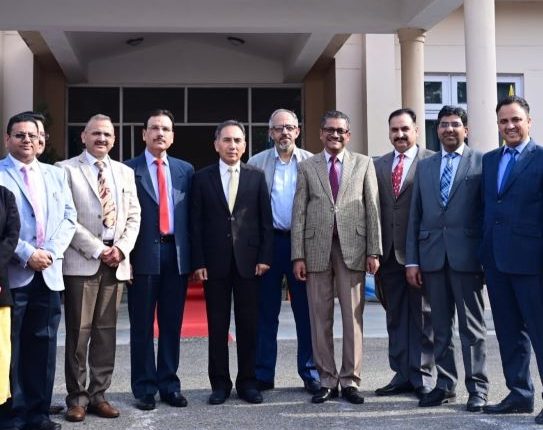 JAMMU, NOVEMBER 13: Two days consultation on Implementation of POCSO Act, 2012 organized by Juvenile Justice Committee, High Court of J&K and Ladakh in collaboration with the department of Social Welfare U.Ts of J&K and Ladakh and supported by UNICEF India concluded today at Police Auditorium Jammu.

The brain storming deliberations of day one had already set the tone and tenor of the second day consultations. Today, fifth session of the conference, on a very important topic relating to mental health and psycho-social support to the survivors and their families was chaired by Justice Sindhu Sharma, Chairperson, J&K Judicial Academy in which Saurabh Sashi Ashok, NIMHANS Bangalore was the resource person. While addressing the participants through virtual mode from Bangalore he shared his experiences with the child victims of intellectual disability. Justice Sindhu Sharma, in her deliberations emphasised on providing psycho-social support not only to the victims but also to their families particularly parents.

In the last technical session the topic for discussion was the “Role of the Police in the investigation of POCSO cases and intersection of POCSO and Juvenile Justice Act”. This session was presided over by Justice Rajnesh Oswal, Member, Juvenile Justice Committee. Anant Kumar Asthana, a prominent Child Rights Lawyer from New Delhi was the resource person. While speaking on the occasion, the resource person informed the delegates that recently the POCSO Act of India has been rated as one of the best legislations in comparison to similar legislations enacted by some developed countries like U.K and Sweden. He also stressed upon the grant of compensation to the child victims under the POCSO Act, which is the sole discretion of the Judge dealing with the POCSO cases. Justice Rajnesh Oswal, highlighted the grey areas in the legislation and stressed upon the need for having separate agency and institution to deal with the POCSO related crimes. The queries raised by the delegates were responded satisfactorily by the resource persons as well as the Chairpersons.

The closing session was also attended by Justice Tashi Rabstan, Chairperson, Juvenile Justice Committee, who impressed upon the participating delegates to make best use of the techniques gained during the conference in their day to day working vis-à-vis the cases relating to POCSO Act. Justice Rajnesh Oswal, Justice Rahul Bharti and Justice Rajesh Sekhri also remained present during the course of deliberations of the day.

The programme concluded with the vote of thanks proposed by Amit Kumar Gupta, Member Secretary, Juvenile Justice Committee. The proceedings of the programme were conducted by Swati Gupta, Senior Civil Judge.