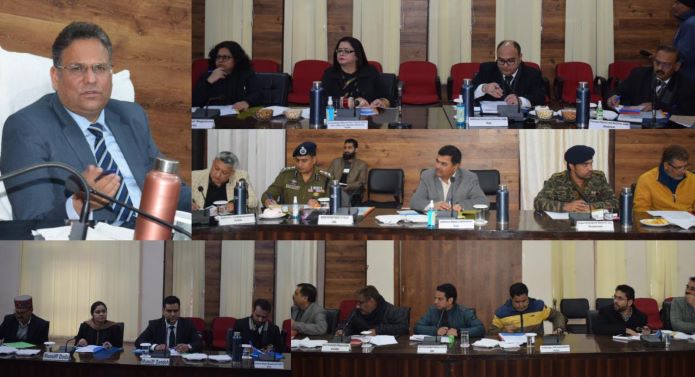 The aid was provided to the beneficiaries in collaboration with the District Social Welfare Department Doda.

Interacting with Judicial Officers of the district, Justice Nargal highlighted the role of District level Judiciary.   “Since District judiciary is the first point of interface with public/ litigants, therefore its conduct and the efficiency is the reflection of efficacy of the institution as a whole in the estimation of general public”, he said, adding, “Not only the issuance of timely orders to the litigants is needed, but they also need to be heard, not mechanically, but comprehensively.”

Justice Nargal also counselled the judges to be respectful, patient, dignified and courteous with all those with whom they come across in the course of official work. He underlined the importance of indomitable courage to be shown by Judiciary by following due process of law so that faith of people in the supremacy of law is neither dented nor eroded. He also laid stress on use of technology by judicial officers in the course of performance of judicial function as far as possible.

Echoing the words of Chief Justice of India, Justice Dhananjaya Y. Chandrachud on use of technology, Justice Nargal said “We need to adapt to technology because technology is here to stay and it must be used for transformation and not automation.”

Justice Nargal also interacted with members of Bar at Doda and Bhaderwah. Interacting with members of bar associations, both at Doda and Bhaderwah, Justice Nargal underscored the need of cordial relationship between the bench and Bar and said “Bench and Bar are two sides of same coin and whichever way you flip it, the fact remains that we must not allow avarices, aberrations etc of any kind to creep into that relationship whatever the motive or incentive for their voices might be.”  He expressed happiness to note that “both bar associations have no complaints whatsoever against any presiding officer in the district and this in turn is a good omen for smooth functioning of the institution”.

Issues regarding infrastructure, security in court premises of the district, difficulties faced by under-trial prisoners etc were discussed threadbare in the meeting and necessary instructions were issued to the concerned for doing the needful at their respective end in a time bound manner.

Highlighting the importance of cohesive working between various stakeholders in justice delivery mechanism, Justice Nargal pointed out, “ district administration and police are amongst such stakeholders in justice delivery system who need to work cohesively and collectively alongside judiciary in order to achieve the goal of effective and impactful administration of justice to all, irrespective of people’s caste, creed, race, religion, language and gender” adding, “this is a pursuit which should continue to be pursued”. “Historical trajectory of a nation, Justice Nargal further said – is determined by the quality of its public institutions, which institutions and their members should prescribe to a higher norm, one of selfless service, flawless ethics and thorough professionalism, amongst other ideals and goals which make up that historical trajectory” Justice Nargal added further.

After inspecting courts at Doda and after having a meeting with the District Administration and Judicial Officers at Doda, Justice Nargal left for Bhaderwah and inspected the courts there also.

Justice Nargal interacted with the bar members at Bhaderwah also. While taking feedback on the reconstruction of the records lost/gutted in the fire incident, Justice Nargal advised that necessary safety measures must be taken in consultation with the Fire & Emergency services department so that such incidents can be avoided in future.